Since my first visit in 1996, I have been in love with the Golden Isles region off the coast of Georgia.  My favorite island is St. Simons Island, Georgia (SSI),  a beautiful resort area steeped with history and gorgeous views of the surrounding Atlantic ocean.  One of the women who has been a constant in my life, and who I call one of my #BFF, Lea King-Badyna is a resident, and introduced me to the area after we met while working on the same job when I visited the area for a work assignment.  It was love at first site and from then my friendship with Lea has grown as well as my love for the island.

Not long ago, Lea shared something on her Facebook feed that caught my eye about an art installation project she was overseeing in the area called the Right Whale Litter Sculpture project.   I quickly contacted her and asked if I could feature it as part of my on-going blog and podcast series about how art is making a difference in the lives of people and communities.  She agreed to be interviewed about it and I am absolutely thrilled to share how art is making a difference in one of my favorite getaways in the United States.

Before we get into this special project, let me share a little bit about my friend Lea.

She attended Mercer University and graduated cum laude from Valdosta State College with a BFA in speech communications with an emphasis in public relations. Lea’s public and community relations career spans 25 years in the Golden Isles with particular emphasis in the coastal environmental realm. Spending a decade with the Georgia Department of Natural Resources/Coastal Resources Division, she organized and coordinated CoastFest, Georgia ’s largest outdoor celebration of coastal, historical, natural and cultural resources, growing the event to 90 exhibitors and over 7,000 annual attendees. Prior to joining Keep Golden Isles Beautiful, Lea worked as part of the University of Georgia Marine Extension Service and Georgia Sea Grant’s communications team, serving outposts in Brunswick, Athens, Atlanta  and Savannah.

Active within the community, Lea is a founding member and past chairperson of the Glynn County 4-H Advisory Council, FaithWorks volunteer, LifeLink of Georgia and Brunswick Transplant Group organ donation awareness community educator and a YMCA Tribute to Women Leaders event volunteer.

A 501(C) 3 non-profit organization, Keep Golden Isles Beautiful functions under the leadership of a volunteer Board of Directors and Advisory Board and has a full time staff of two.

Tell me about the litter sculpture installations…how did it come about? Who are the artists? What is the goal of the installation?

In January/February 2017, five unique sculptures were placed in community public spaces, each portraying a coastal creature and highlighting the effects litter has on its environment. Fabricated of metal mesh, each hollow sculpture contains internal space for trash placement, spotlighting the juxtaposition of creature versus litter.

Involving volunteers and community partners, the premise of the project was simple: CLEAN. Volunteers participated in community cleanups. CREATE. Participants filled the sculptures with the collected litter. CELEBRATE. Community members gathered to share their efforts and celebrate the sculpture installations that represent a clean and green community.

It was important to place each sculpture in a public space located beside water, to show the connection of land litter to marine debris: Coast Guard Station park, Right Whale; Overlook Park, Manatee; Mary Ross Park, Pelican; Blythe Island Regional Park, Shrimp; North Glynn Recreational Park, Blue Heron. Educational interpretative signage accompanies each sculpture to highlight the coastal critter, its importance in the Coastal Georgia environment, litter and the negative affect litter has on the coastal critter and/or its environment.

The goal of the project is to increase litter prevention awareness in a creative and unique way while simultaneously providing five new public outdoor art pieces.

The sculptures are created by Jim Swaim of Environmental Sculptures from North Myrtle Beach, South Carolina.

The “Coastal Litter Prevention Program” sculpture project was made possible to Keep Golden Isles Beautiful under grant award #NA15NOS4190160 to the Georgia Department of Natural Resources from the Office for Coastal Management, National Oceanic and Atmospheric Administration, while the “Make Art Not Litter” sculpture project was made possible by a grant from the Communities of Coastal Georgia Foundation.

Do you think art can help change behavior regarding our natural resources?

Art most certainly can lead to behavior change regarding natural resources. Art can begin dialogue, and many times that is the impetus to change, dialogue.

How can people find out more about the project? 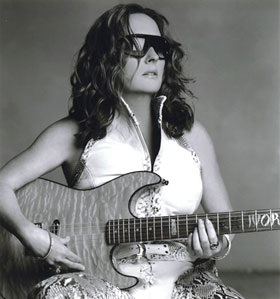 It hit me like a slow bullet. Kind of like the announcement of Michael Jackson’s death. But this one was a bit harder in some ways. This one’s personal. When I heard late yesterday, after a day of relaxation that one of my personal, musical icons, Teena Marie (aka: Mary Christine Brockert, Lady T, Vanilla Child, etc.) was dead, I scarely believed it. And I still don’t.

Teena was in essence, one of the best vocalists and lyricists out there. Period. In my humble opinion, these young girls out here today (Rihanna, Beyonce, Keisha, and all the rest- yes I said it) couldn’t hold a candle to Tee in her prime up until her last album “Congo Square”. It was that combination that has held me spellbound since I was 12 years old, listening to her records in a snowy town in upstate, New York, belting out almost every song on her 1981 “It Must Be Magic”. I have since collected every album with the exception of “Wild and Peaceful”, her first which was produced by the late funk legend, Rick James. A matter of fact, I have more of her CDs than any other musician in my collection. Yup, it was that deep for me.

I had the priviledge of watching her perform live at four concerts, my first being in Atlanta and the last at the Birchemere in Alexandria, Virginia in August of 2009. This last concert was one of the most interesting ones and very special. Prior to it, I “tweeted” about how excited I was to attend just to be honored with a return tweet from Lady T herself, stating how much she loved the venue and looked forward to performing an intimate acoustic set at the concert. Like, what celebrity does that these days?

I will always remember that particular concert fondly because for the first time she opened up about her relationship with Rick James and shared stories between sets about her various adventures with the King of Punk Funk, some I knew about but a lot I didn’t.

I learned fairly recently that Teena was also a visual artist and enjoyed drawing and painting.  In one of her last tweets, Teena shares that she started a foundation “A Time to Paint” which donates art supplies to children to encourage creativity.  I was especially moved by that.

A part of my teenage and young adulthood was lost as of the confirmed announcement yesterday. Lady T, thanks for sharing your “magic” with us for so many years. Say a big hello to Rick for me and let him know I miss him too.

“Memories past but not forgotten.

My euphonic heartache, do I brag, complain or sport

I have done some things I swore I’d never do

A credo assimilated and not believed

Life has robbed me of my innocense

From the mouths of vermin lips…an intrinsic facade

I’ve been icey cold, blanketing myself in lyric and eating melodies to surve

That reallly are quite bland

“Now is the winter of my discontent”

For in fact it is not that grand

It is not enough to say you care

You’ve to spread the word – have you heard

Jesus he was just a man – the Bible tells us so

He gave more than just his hands and he never said no.”